If you haven’t been sure if Overwatch is “Your Thing” then now’s the time to find out! Blizzard have announced that next weekend (9th of September to the 12th of September) Consoles will be able to play the game for free during that time period.

Restrictions: Other than the time frame it appears there no restrictions on the game a full roster of 22 Heros, all maps, all game modes including Quick Play, Custom Games, Weekly Brawl. It seems to be as if you own the game for that period & the best news is if you decide to buy it after the time period has run out you get to keep all your progress/items etc.

How To Install: The installer will only be available during the free period (Meaning no pre-install Boo!), heres a small infographic from the Overwatch site. 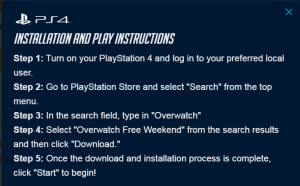 What is Overwatch?: Over who now? not sure what this game is and what its about, our friends over at the Playstation Blog have put the following FAQ Up and if you cant get a chance to play then we should be twitch streaming this at some point over the weekend!

How many heroes are available in Overwatch?
There are 22 heroes available to play in Overwatch! To learn more about these heroes, click here.

How many players does each mode support?
All game modes and maps support 12 players in a 6v6 format.

What different play modes are available in Overwatch during the free weekend?
There are a variety of ways to play Overwatch!

Will there be any sort of maintenance planned during the free weekend?
There’s no downtime or maintenance currently planned for the free weekend on any platform. If this plan changes at any point, we’ll be sure to provide information about major service interruptions in the official forums. For additional status updates, be sure to follow @PlayOverwatch on Twitter.