Not a lot in this re-cap as it was quite a slow day all round.

For some reason my Mic was off sounded muffled and strange, not sure why as normally its fine. but this time for the entire stream it was terrible

I started off by doing some of the daily HVT’s(High value Targets) then a couple of Intel missions to get enough to open the weekly HRT(High Risk Target) we had 3 in the group at the time which was enough for us to complete this mission.

I managed to get a nice 3 stat holster which i rerolled Pistol Damage to a mod slot quite nice if I want to try an LMG build again. 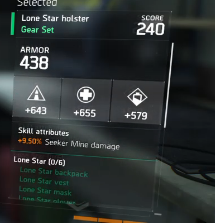 We then went off to the dark zone, had some fights but nothing worth showing. Then after that I did the Daylie Challenging which was a challenge the end was just me alive running around kiting until I could get someone ressed!